Charming “Peter and the Wolf”

The Camerata New York Orchestra, with its emerging young international talent, teamed up with Alec Baldwin and the Southampton Ballet Company on Sunday to present a delightfully charming version of Prokofiev’s children’s classic, Peter and the Wolf, to a packed house in a festival tent at the Wolffer Estate in Sagaponack. 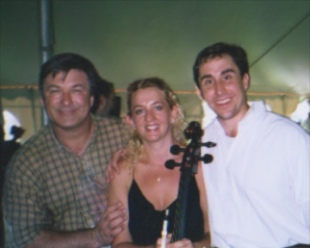 This children’s tale, written and scored in 1936, has a long tradition of celebrity narrators, both in concert and on record, and Mr. Baldwin must be added to this list as one of the best. In the spirit of the event, I brought my 5-year old son, Alex, who was suitably impressed by the fact that the narrator of many of his favorite Thomas the Tank Engine episodes was there, live and in person.

He was not disappointed, as Mr. Baldwin’s wry sense of humor seasoned the narrative with an extra dimension of wit, which Alex enjoyed immensely.

Prokofiev invented the story himself, drawing on memories of his own childhood, to introduce children to the orchestra. Each character is represented by a different instrument or group of instruments: Peter by the strings, the bird by the flute, the duck by the oboe, the cat by the clarinet, the wolf by the horn section, and so on.

The story and the music, in accordance with the dicta of Stalin’s artistic theories, make a simple fable about the boy Peter, who, through cunning and social cooperation with the animals of the forest, captures the evil and dangerous wolf.

No adult who understands how literature and music are written under the persecution of a tyrannical regime can miss the tongue-in-cheek humor of the story as a Soviet citizen might have understood it. Obviously, the silliness of the quarrel between the duck and the bird over which is truly a bird, and the inability of the cat to put aside her desire to eat the bird in the face of the greater threat to all posed by the wolf, are lessons any Young Pioneer has to learn.

However, other levels of meaning present themselves, if the wolf is understood as a metaphor for something other than exploitation by the bourgeoisie or the threat of German expansionism.

As a children’s tale, this work is always a delightful aural and visual spectacle in performance. It was especially so in this case, where the story was visually interpreted by a talented group of local young dancers, under the direction of Simon Caudullo. Sara Jo Strickland’s choreography was lively and light and perfectly geared to showcase these developing dancers in a variety of age-appropriate roles. And without exception, they shone brightly.

I especially enjoyed the dancing of the cat, who was persistently aggressive toward the bird, and the calm assurance of the young Peter, both as he explores the world of the meadow around him and as he enlists the aid of his fellow creatures to capture the wolf.

The contributions of the corps de ballet were irreplaceable, as the living environment of green vegetation and blue pond water, and as a very young band of hunters whose triumphal procession at the end proved to be a visual and sentimental victory. And who can forget the wonderful explosion of feathers from behind stage as the duck was swallowed in one gulp by the wolf (only to be liberated at the end in a tasteful “fit of coughing”)?

The Camerata instrumentalists were uniformly excellent under the able direction of Richard Owen, who also serves as the musical director of the group. Especially notable were the horn players, whose performance of the wolf motive was appropriately moody and threatening, the oboist, whose duck passages were suitably silly as well as tragic, and the bassoon player, whose interpretation of the pompous but concerned grandfather was perfect.

The string section was flawless and so proved it has the potential hinted at in its concert the evening before.

All in all, this performance was totally enjoyable from every perspective. As Eleanor Sage Leonard remarked at the beginning of the program, almost everyone in the audience probably remembers the first time he or she heard Peter and the Wolf as a child. With any luck, this performance will be one of those memories for a new generation of music lovers. I do believe this will be the case.

When Alex and I walked the beach Sunday afternoon, I asked him how he had liked the concert. “It was easy to understand the story because of the music,” was his reply. How about the dancing? “Well, I like it but I would have done it differently. More like rap. But I also really liked it just the way it was.”

This response is perhaps the best that could be imagined. To want to experiment, to incorporate the new to enrich the old is a legitimate impulse of the artist and an understandable desire in an audience: to love what exists or is presented, but at the same time to see other possibilities.

His was an authentic response to an enchanting performance. Could any true artist ask for anything better?