Published June 10, 2019 | By Richard Owen
US Correspondence: Church and Music 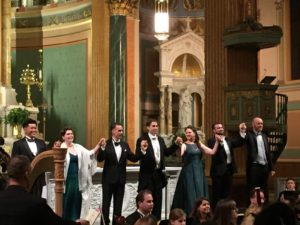 A phenomenal thing happens when music meets the church. This good fortune was brought home at St. Jean Baptiste, on Lexington Ave, where fine music is a permanent presence in all liturgical moments, both by organ and piano, as well as by soloists and choir, but especially by the existence of a prestigious symphonic ensemble, the Camerata New York, in concerts, and at the beginning of the summer, every year, in an event named DIVINE OPERA GALA.

Which means that great musical forces are demanded by the divine forces, and the divine keep their eyes on the people who make music in the church, proof that they sponsor them, as at Camerata’s concerts, the church is always FULL with hundreds of people.

That’s how it was this year, when the Gala triumphed through the performance of the musicians, the orchestra and the soloists. The orchestra is made up of 45 musicians from many nations. Among them is a Romanian, clarinetist Alexandru Negruta. The soul of this event is Richard Owen, the conductor, organist and co-founder of Camerata, in addition to his wife, Kate Owen, who is the cellist in the orchestra and the exceptional voice during the liturgy at the Cathedral. They have three boys, all of whom have musical inclinations.

The Gala’s program was very demanding, with difficult selections, but with high-quality soloists such as soprano Amy Shoremount, soloist at the Metropolitan Opera, where she played Mozart, Verdi, and the role of Leonora in Fidelio by Beethoven; she also went on stage at Carnegie Hall, in the 9th Beethoven Symphony, and many other locations, where she usually interprets Puccini’s works.

The primary oeuvre was Puccini, where Amy Shoremount sang from Tosca, presenting the duo of Act I with Mario Cavaradossi, taking as her partner tenor Riad Ymeri of the State Opera in Albania, who presented his role very effectively, after he made his first entrance with true force, the crucial piece in the repertory of any tenor: the aria of Recondita Armonia of Tosca. The duet also involved the church, when Tosca prays at the altar. Floria Tosca is a famous singer in love with painter Mario Cavaradossi, who is painting the church. But a series of intrigues, headed by Baron Scarpia, the head of the police, leads to the death of the heroes. The action takes place in Rome in a church. The duet captures the jealousy of Floria when she sees that the Madonna model for the portrait is a marquis. It is the greatest duet in Puccini’s work, like a labyrinth, with fortissimo moments and pianissimo, reminiscent of Wagnerian waves.

The orchestra was installed right between the altar and the pews of the parishioners, and the soloists were on the platform in front of the altar, with sufficient space to allow them to fully act. I had the chance to sit near the shrine on the side, from where I could watch all the movements of the soloists, the performance of the instrumentalists and the conductor. As if I was in the very soul of the show.

The concert began with the Overture of Norma of Bellini, followed by the famous Casta Diva, sung by Amy Shoremount, a very difficult aria in which the great priestess of the druids, Norma, invokes the gods to support her love, she being in love with an enemy commander, the father of her children, who betrays her. The aria is accompanied by the choir, consisting of five soloists. The action of the work takes place at the sacred temple of the Gauls. It is a mystical work, a romantic tragedy, because its essence is love.

The second part of the concert began with the prelude of Act 1 of Lohengrin by Wagner, followed immediately by Einsam in Trüben Tagen, performed by Amy Shoremount, who proved to us she has a powerful Wagnerian voice. Then followed the famous Intermezzo Sinfonico from the opera Manon Lescaut by Puccini, supported by the orchestra, after which we heard the mezzosoprano, Anna Viemeister, making a strong impression, as the current alto soloist of the Church choir of St. Jean Baptiste, who sang the difficult Senza Mamma aria from the Puccini’s Suor Angelica. The program was accompanied by the texts of the arias in order to be able to follow the experiences expressed by the soloists.

At the end of the concert was a truly triumphant closing. It was the finale of the first act of Tosca, Scarpia’s aria, which takes place right in the church, as Puccini had envisioned. There was also the Choir, in white vestments, who reply to Scarpia in Latin. Moreover, there was also Scarpia’s sergeant, to whom he gives evil instructions, as well the Catholic procession of priest and assistants in full liturgical dress, who come and seem to scoff at Scarpia, who falls to his knees asking for forgiveness and repentance.

Scarpia’s role was interpreted by baritone Andrew Cummings, a prominent singer and one of America’s most valuable voices, who, over the years, has sung roles such as Rigoletto, Macbeth, Kurwenal of Tristan and Isolda, Count in Capriccio of Strauss, Mahler’s Songs of wayfarer, and was a soloist in the famous War Requiem by Benjamin Britten, which I could hear for the first time at the 2017 Enescu Festival. This Finale in Tosca was the true culmination of the concert, because it celebrated its presence in the Church of St. Jean Baptiste. In fact, the selections in the scheduled works were all chosen by the relationship to the church, which played a vital role.

I have to say that it is a privilege to hear such symphonic music and opera played in such a great cathedral. Here the sound is of great accuracy and magnitude, with a very special echo, like singing in a cosmic cave. It is not surprising that the presence of the Altar is overwhelming. You have the feeling that Jesus himself, on the cross on which he is crucified, participates in the concert, as well as the Mother of God and the other saints, including the divine Holy Spirit. Indeed, we can all sing with Camerata’s choir: Te Deum laudamus!