Rioult and Camerata in Joyce Theater

The Years It Takes to Make a Moment: Pascal Rioult Premieres Iphigenia

Pascal Rioult is a choreographer, but he constructs his works from materials that very few others know how to find. He’s the Artistic Director of RIOULT Dance NY, the Company that he founded in 1994 after a successful career as a principal with the Martha Graham Dance Company. He’s been making dances for years, complex, captivating, intensely musical works, quite often set to full symphonic scores that few contemporary choreographers would venture to explore. 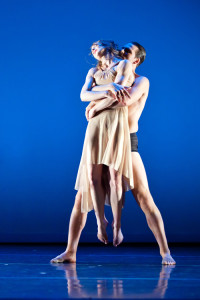 On Tuesday, June 4th he’ll premiere his latest work, Iphigenia, when RIOULT Dance NY opens their New York Season. In eight performances that run through Sunday, June 9th, audiences at The Joyce Theater will have the chance to see his most recent alchemy unfold, a collaboration with composer Michael Torke, along with three other critically acclaimed works.

Iphigenia is a showcase of ability, and of originality, the intricate result of a complex series of creative choices that Rioult weaves into everything that his audience sees. It’s the third work to be completed as part of the Company’s Dance to Contemporary Composers Series, which each year commissions a new work by a living American composer. The collaboration with Michael Torke, and all of its important creative consequences, is emblematic of the way Rioult continuously looks to add new dimensions to what he brings to Dance.

In some ways it’s an important departure;Torke’s score is for a chamber ensemble of eight musicians from the Camerata New York Orchestra, which will perform the work live at RIOULT’s New York Series under the direction of Musical Director Richard Owen, but it’s characteristic of Rioult’s ability to configure the visions of gifted collaborators with his own.

Posted in Past Concert